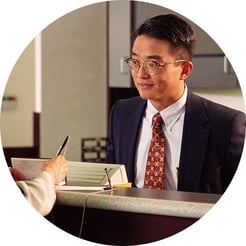 As technology advances at an incredibly fast pace, financial institutions are provided with a multitude of opportunities for growth — but they're also faced with various new challenges and risks. Criminals around the world are undoubtedly becoming more sophisticated as they turn to new methods to bypass safety measures and steal hard-earned funds.

It's clear that financial organizations must deploy a comprehensive security solution to ensure protection, and one that leverages both 360-degree and panoramic video technology can provide incredible value by allowing a unique way of capturing large or small areas completely free of blind spots. Whether it's at an ATM, cash counting rooms, public areas within bank branches or reception areas at corporate head offices, indoors or outdoors, a trustworthy, dependable and robust surveillance system is needed to keep clients, staff, assets and confidential information safe.

So, what are the benefits of a combined 360 and 180-degree security solution within banking?

Establishing a security posture is not just an option for a financial institution — it's a necessity to combat the very real and increasing threats facing the industry such as theft and fraud. Effectively safeguarding customers and assets starts with utilizing a combined 360-degree and panoramic surveillance system that elevates situational awareness and boosts efficiencies.

ONVIF and the Importance of Standards